By Diana January 14, 2010
My little monster, as I like to call him recently, is four weeks and two days today. We were unable to get him weighed last Tuesday since I started "training" him to sleep on his own again without being held so needless to say it was a very long, draining day that included tons of crying from both mommy and baby. I'm assuming Nathaniel is now more than 10lbs since he weighed 9lbs, 13oz last Friday. 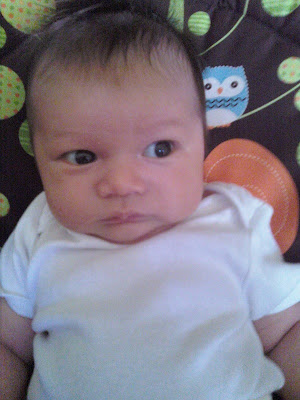 It is so sad to think that this precious face quickly turned to the next picture in an hour time span because I layed him down in his bassinet after falling asleep while breastfeeding. My husband and I are questioning whether Nathaniel is too young for the "crying out method" and to be honest I am still against it. Listening to him cry his little heart out literally gives me a headache not because it sounds annoying but rather because I have to fight every ounce in my body that's telling me to console my son. Dean says he doesn't mind holding Nathaniel even at nights and even when he has to be up by 0400 to go to work at 0500 (darn those marines for PT-ing at 0500! Yes, thank you for keeping my husband looking hot & sexy but can it be please a little bit later?). I don't mind "cuddling" with him during the day either but we've had two occasions when we were both so exhausted that we wake up, three to four hours later, with Nathaniel's face right next to us--sleeping with us on our bed. So as much as I hate listening to him cry, it is safer if he sleeps in his own bassinet.


Lots of well meaning parents have been telling us it's better to break him out of this habbit now and that it usually takes three days to a week for him to realize that he can't be held so we're just hoping and praying it happens soon. I've also read that my little boy is too young to realize and remember what we're trying to teach him. *sigh* Nathaniel is currently snoozing in his swing right now but only after I held him for 30 minutes after falling asleep. I can totally do this during the day but at nights, all I really want to do is feed him, place him in his bassinet, and sleep! No waiting and holding him for at least 15 minutes first because I'm tired too (I guess that's being selfish in my part) and that could quickly turn to a baby sleeping next to us without even knowing we "placed him there" in the first place. Anyway, whether this method is actually working or he's just plain exhausted from crying so he's finally "sleeping on his own"... well, I guess I'll never know which one for sure. 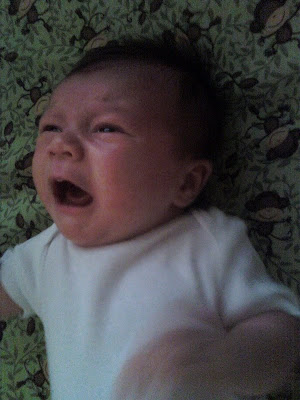 Yes, those are real tears :(