By Diana October 12, 2010
I have been baking quite a bit for the last few weeks. I was finally able to take the Wilton Basic Cake Decorating class last month and was hoping to continue taking the rest but there's schedule conflicts this month and we're unfortunately low on "hobby funds" at the moment. But it works out too since I want to get better at bread baking. 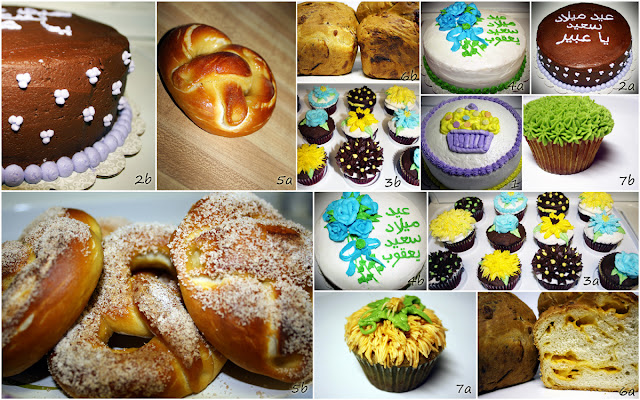 4a, 4b: September 30, 2010. Justin's 20th birthday cake and Wilton: Basic Cake Decorating Class IV (Final); 9-inch Marble cake with vanilla buttercream icing; (Translation: Happy Birthday, 'Yakub' [Jacob]); I tried to make it as manly as possible while still applying what I learned in class!; (Instructor made the 'ribbon')

5a: October 2, 2010. Homemade Soft Pretzels baked by hubby and me!
5b: with Cinnamon Sugar; Photo by Hubby