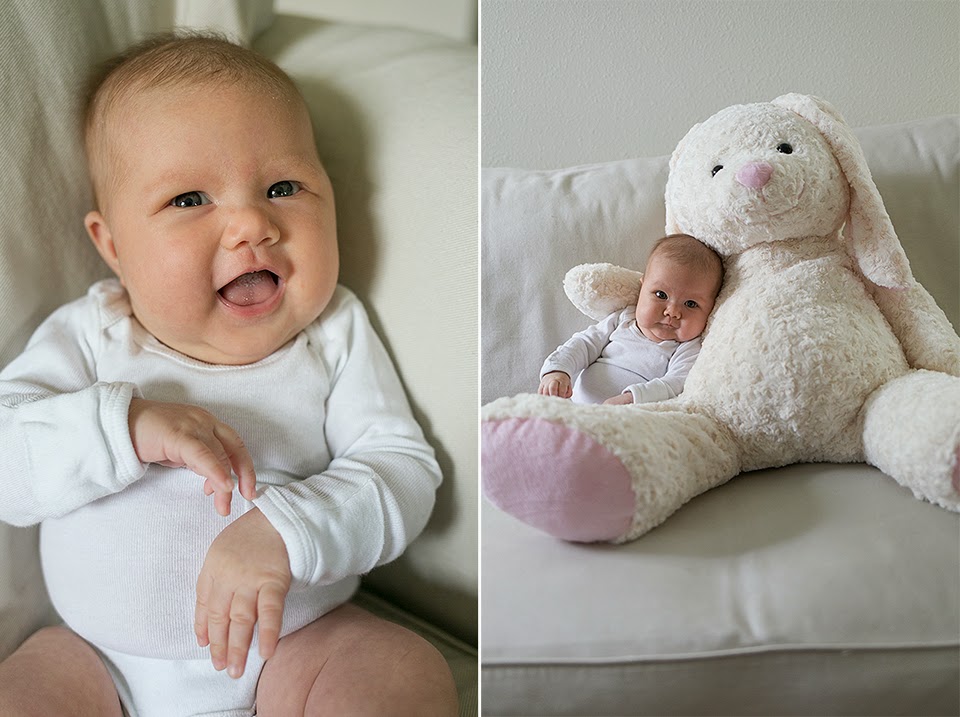 This past Saturday, Amelia turned two months old! She has started cooing and social smiling and I absolutely love this developmental stage. Finally! A "reward" after all that hard work. She also loves watching her big brother and Nathaniel loves putting on a show for her ;)

Amelia sleeps really well during the day (1.5-2.5 hours) as long as she is being held. Nighttime sleep is a little more predictable now. Her longest stretch of sleep is four hours long and she always wakes up around 3am for her first night feeding. After that, she is up every two hours. She is a slow eater (30 minutes) but I think most of it is because of me. I let her eat at her own pace and she rewards me with long breaks in between. Plus, now that my tear has healed, I am finally enjoying breastfeeding. Sometimes, I don't notice that she's finished eating and is just comfort suckling instead.

Amelia's baby bald spot is hilarious. Instead of just at back of her head, it goes all the way around! She rubs her head from side to side when she's laying down. She also seems to have avoided baby acne (yay!). However, I spent a lot of time baby wearing her while we were sightseeing with my family last week and she either developed a heat rash or contact dermatitis from my skin oil, lotion and/or laundry detergent. It has cleared now but for a while, Nathaniel was saying his baby sister has "red polka dots" on her face. Hahaha!

And since my family were in town last week, we also spent quite of bit of time in the car driving from places to places. Just like Nathaniel, Amelia proves to be a great traveler so far---as long as the car is moving! If she's not in a deep slumber, she cries during stop but immediately stops as soon as the car moves. Such a silly girl.

Hubby left at the end of last month to go to school. We try to talk on the phone and Skype for as often as his schedule allows, which unfortunately isn't very often. But on the rare times that we get to, Amelia loves smiling to her Daddy's voice. I will be asking Hubby to leave a voicemail message for Amelia so I can play it for her everyday. That way, when they do see each other again in a few months, Daddy would hopefully not be too much of a stranger.