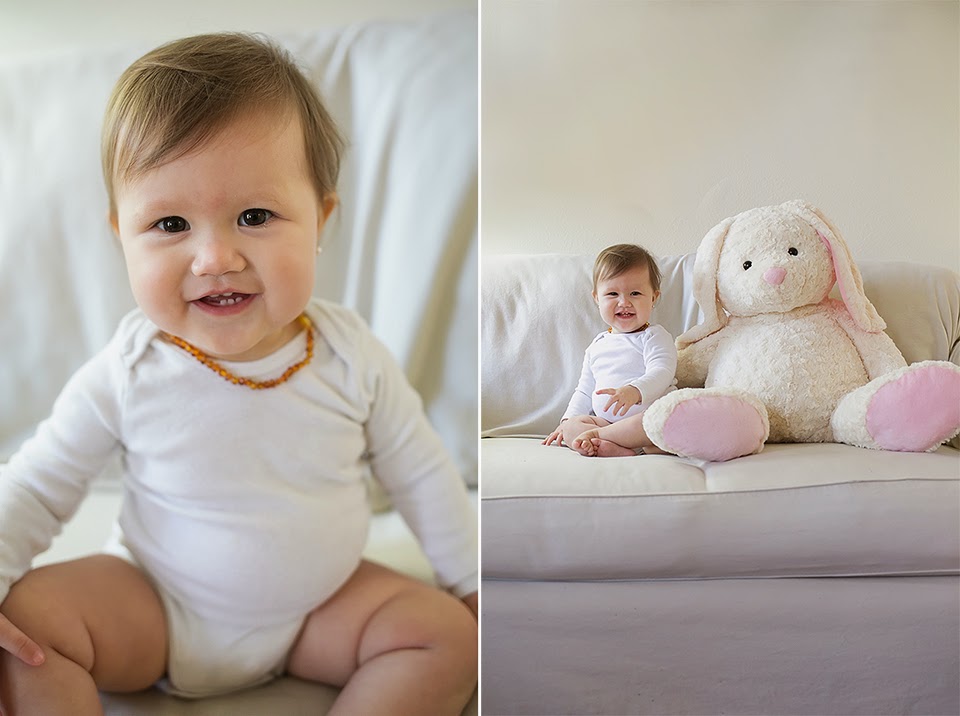 Amelia is eleven months old yesterday! I cannot believe we will have a toddler next month. Time really flew this time around!

Amelia adjusted really well to sleeping on her own. Last month, I used to move her in our bed when she wakes up around 4am to nurse. This time, I just nurse her in her room and then immediately put her back in her own crib. We noticed that she sleeps better and longer when she is by herself. Whenever we try to co-sleep now (even during nap time), she is all over the bed, pulls herself up using the headboard and pokes our eyes. Nathaniel did the same thing at this age and it's pretty cool to see history repeat itself.

We dealt with a terrible diaper rash this month since she essentially wore the same dirty diaper for 13+ hours (because she started sleeping on her own). We are still cloth diapering during the day and did lots of air drying/nakey time but I still couldn't control it after a week. In fact, it was so awful that we almost had to take her to the urgent care because it was an open wound at that point and we were worried about infection. Thankfully, a friend gave me an ointment to try first called End-It and after a couple applications, it was cured!

Amelia loves to scrunch her face when she is happy. Lately, she even blinks her eyes pretty fast and does this hyperventilating breathing when she is really, really happy. She also loves to wear everything: hats, necklaces, sunglasses, hairbands and even Dada's Xbox headset. If she can put it on her head or around her neck, you can pretty much guarantee she will do it. She is such a girly-girl!

We were sick during Christmas time but it was still a great first Christmas as a family for four. As expected, Amelia hated Santa and Gunny Claus! Santa brought her a beautiful doll that looks like her but Amelia doesn't like anything that has eyes at this time. She pokes the eyeballs with her fingers and then kicks it away with her feet! Hopefully she will change her mind later as she also received a couple dolls from Oma and Opa.

I was very impressed that Amelia stayed up until midnight to ring in the new year! We got together with a few families from church and celebrated New Year's Eve together. Amelia was passed on from mom to mom and I think that kept her entertained.

Amelia is awesome at playing peek-a-boo. She also loves to pretend to share her food/toy but takes it away at the very last minute. She thinks it is hilarious! She enjoys being tickled and will even ask for it! Amelia has started to pull herself up but she hasn't let go just yet. However, she is slowly becoming more brave at letting go of the support. Maybe by next month, she will start walking. Oh boy! I know Nathaniel is ready and very excited about that.