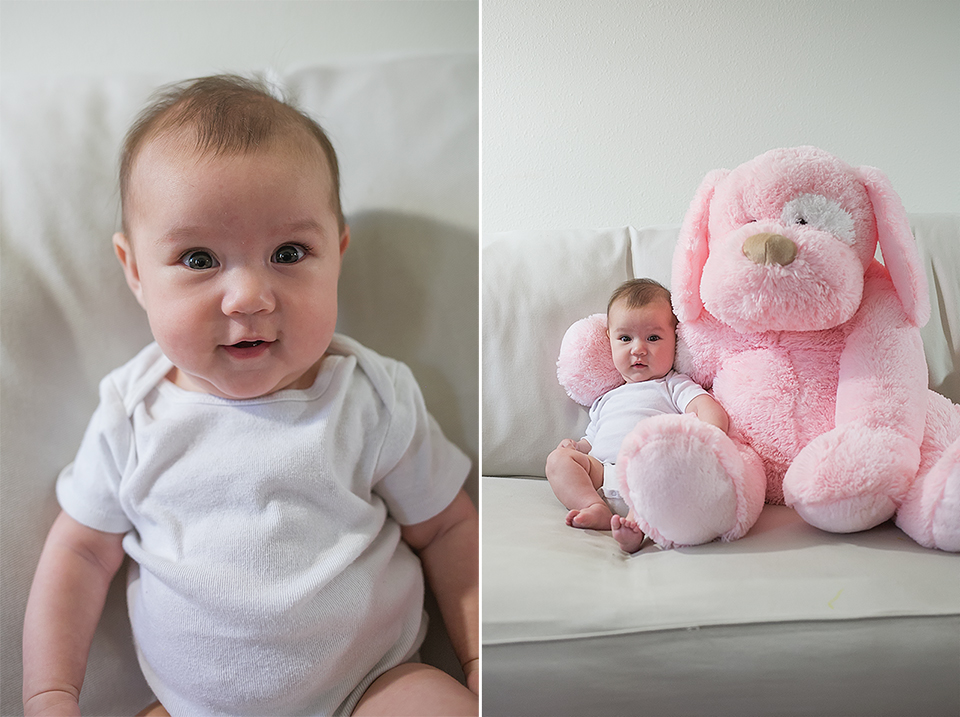 Eleanor is four months old! This monthly photo is by far the most difficult one (of all my children combine!) to date. She was such a wiggle worm and didn't want to sit up straight. I also forgot to use the monthly sticker and after that whole debacle, I just didn't have to energy to go back and reshoot.

Giggles! Eleanor's most ticklish spot is her neck, specifically under her chin. She has the most adorable little laughs.

First trip to the ER. Eleanor spiked a 103-104F temperature rather quickly when was just three days shy of being four months old. It's a general rule that any infants three months old and under must be seen when febrile. She was tested for RSV and flu and both were negative. Her chest x-ray was also clear. Unfortunately, poor girlie just had a super nasty bug and there was nothing we can do but to treat her symptoms and try to make her as comfortable as possible.

Does not like to be swaddled anymore! Same goes with the pacifier. I think it was because of above. She was so congested that even nursing was task for her.

First out of state trip. Daddy had an early meeting in Portsmouth so we all decided to tag along. Eleanor did great during the four hour trip. She just slept most of the time!

Onslow County Fair. Does it count as her first fair experience if she slept through most of it? ;)

Hurricane Matthew. Eleanor also survived her first natural disaster. 65mph gusts of wind has nothing on her when it's nap time.

Hands! I have been waiting for this! Eleanor finally realized that the failing limbs belong to her. #babymindblown