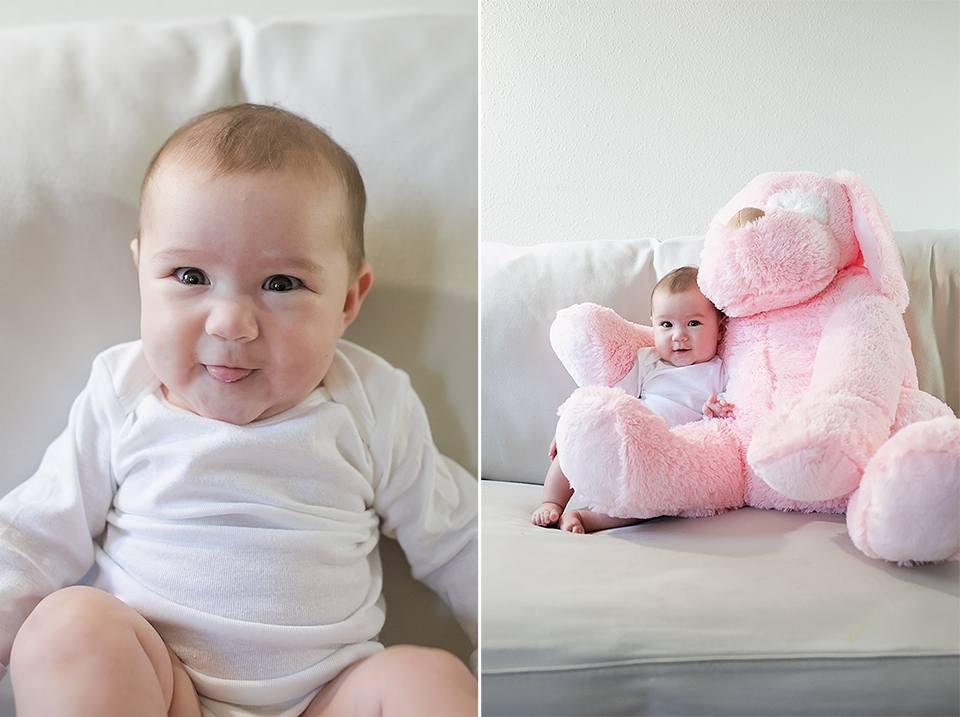 Five Months Old. Eeep! How is it possible that Eleanor is only a month a way from her half birthday? Time needs to slow down!

Rocks by and forth. Eleanor loves to swing her upper body back and forth when she is sitting on your lap. It's all adorable and fun until she does it so hard and hits you right on the chest and collar bone. I don't know how it doesn't give her a headache!

Laughs at her siblings. She is beginning to interact with her siblings and Nathaniel especially loves it. Eleanor will gaze and follows their movement and then laughs when Kuya does something silly.

Pick me up, please! Because Eleanor can now understand her surroundings, she gets really excited when I (or Daddy) walk by. She thinks we are getting ready to pick her up! So naturally, tears ensue when we pass by her.

Kick, kick, kick. This lady loooooves to kick. She can kick those chunky legs all day long!

First Halloween. Eleanor dressed up as a giraffe for Halloween. It was Nathaniel's old Halloween costume from Lola. Daddy added a bow since so  many were commenting how handsome she looked ;)

First Thanksgiving. I debated giving Eleanor her first taste of table food on Thanksgiving. She is starting to watch people eat but when I put an apple against her mouth (to taste the juice), she doesn't really try to eat it.

World Champs. Eleanor's first year on earth and the Chicago Cubs won the World Series. Maybe she is what Daddy needed all along to break the 108 year old curse of the goat.

Double Ear Infection. When the rest of the family was recovering from the plague Strep throat, Eleanor developed an ear infection. Her pediatrician was about to swab her throat (since Eleanor has positive contact from us) when he noticed during his assessment that her eardrums were beefy red. Poor Ellie wasn't even pulling on her ears! Other than runny nose, her only other symptoms were high temperature, lethargic and no appetite.

Chunky. She weighed 13lbs, 11oz during her doctor's visit. Eleanor is finally getting some rolls!

No baths! Eleanor hates baths :( She hates it so much that she cries as soon as she hears the water and I undress her. I'm hoping this will eventually change when she can sit up. But for now, it's quick in and out of the tub because it is just as stressful for me.