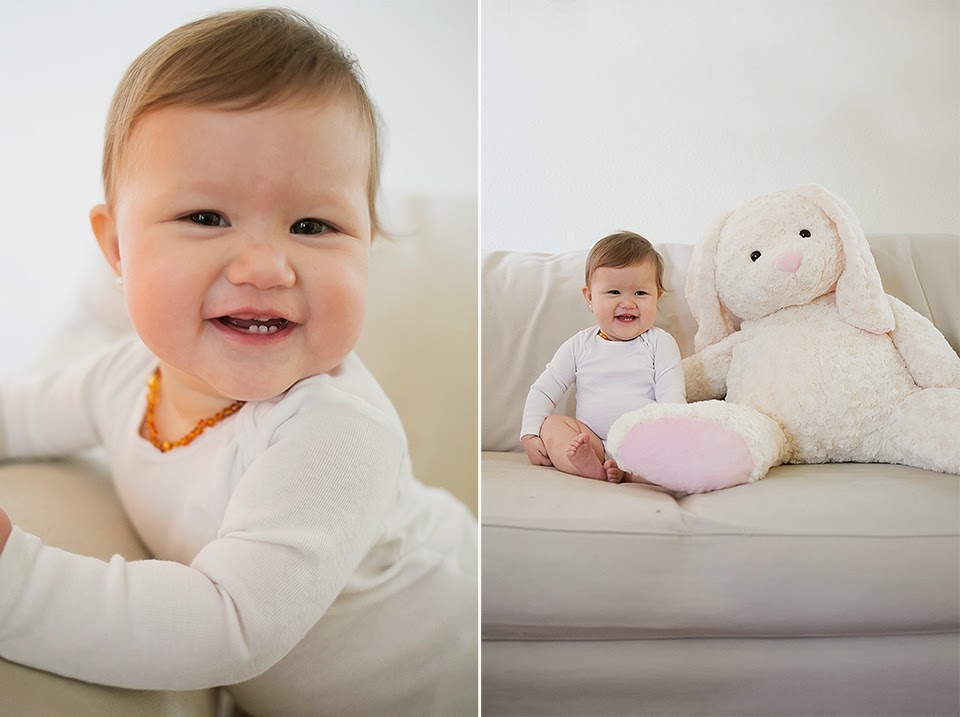 Amelia is ten months old yesterday! She had lots of "first" and big changes this month.

The 239th Marine Corps Birthday ball was in Wilmington, NC, which is an hour and half drive from Jacksonville. We decided to stay in Wilmington that evening so that meant the kids went to the onsite child care. I was really worried about Amelia since she isn't comfortable around new people. She also doesn't regularly take pumped breastmilk from a bottle. I took comfort that Nathaniel will be in the same room and prayed that Amelia will be ok just seeing his familiar face. When we picked them up four hours later, Nathaniel was happily doing crafts and Amelia was just holding her bottle and was being held by an older lady. Nathaniel said she would cry if they put her down.

Amelia went from two bottom teeth to five teeth total! Her top two front teeth are slowly coming and I can't help but sing "All I want for Christmas is my two front teeth" when I see them.

She is properly crawling now even on hardwood floors and is beginning to pull herself up, too. She is such a good eater and eats everything we eat (first cookie, followed by lots of cookies). Don't even bother trying to sneak or hide anything from her. She can't be fooled and she will let you know too that she wants what you are eating! There is rarely anything she refuses to eat and she especially loves apple.

Amelia rode in her first grocery cart and went to Georgia for the first time. She didn't appreciate the long drives once it got dark, so she would scream unconsolably and scratch her face ;( Hubby watched the kids while I shot a wedding session in Dahlonega, GA. And we have this little tradition that started in Gatlinburg, TN where the boys play pillow fight whenever we stay in a hotel. Apparently, little girlie pants wanted to join in on the action. She loved being thrown on the pillows!

She had her nine month old well baby visit. We switched from TriCare Standard to Prime so we are now being seen at the Naval Hospital on base. She had very little weight gain, which could be due to the different scale. However, we are going back at the end of the month for a weight check just to be sure.

Amelia experienced her first Thanksgiving. She missed Thanksgiving lunch since she fell asleep but she made up for it during dinner. Baby girlie loved turkey (which Nathaniel named Fatty McFatterson) and cheesy broccoli rice casserole.

She is also getting better at staying at the Cradle Roll class and nursery at church. I don't really leave her to anyone/anywhere else so it took a while for her to be comfortable around anyone other than the immediate family. Amelia doesn't get upset anymore when I drop her off and she just smiles when I walk in to pick her up after class. Before, she is either crying, being held by one of the teachers or during the few times she is actually having fun, she immediately cries when she spots me as though to show I betrayed her by leaving her there. Silly girl.

And the biggest change this month is that Amelia started sleeping in her own crib. As expected, she wasn't very happy but she is slowly getting used to bedtime. Amelia is in bed around 9pm and wakes up around 4am to eat. I just move her to our bed at that point. Now nap time is a different story. She cries for 30 minutes (I do check on her) and then only sleeps for 30 minutes. It is so tempting to just pick her up and hold her while she naps but I know these difficult few days/weeks will be worth it in the end.